What England’s footballing disaster can teach business owners and entrepreneurs

What England’s footballing disaster can teach business owners and entrepreneurs 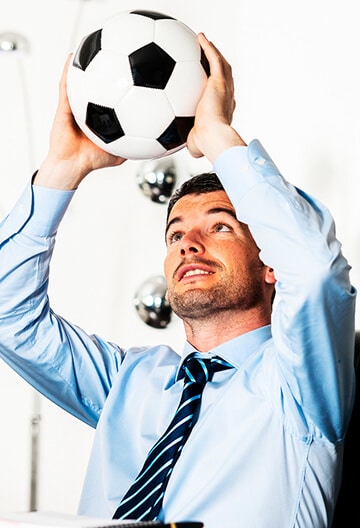 Bob Paisley famously said that football is not about life or death, it is more important than that. And we agree, but perhaps not as in the same context as the former Liverpool manager meant it. Football can teach us a lot about business and England’s somewhat dismal failure at this years’ World Cup brought home a number of key messages which resonate with many of us throughout the recruitment community.

Here are 5 tongue-in-cheek business lessons learned by the failing of our boys in Brazil this summer.

The England team is made up of some of the most exciting talent around. Indeed, when you look at the team sheet and see the names Gerrard, Rooney and Sturridge et al, you would be forgiven for thinking that this is a team whose achievements at club level must surely translate to success on the big international stage. But having a team of star performers means nothing if they don’t work together as one unit.

All recruitment leaders have teams made up of good consultants and great consultants. The trick to getting the best out of all of them as a collective is to encourage greater collaboration between one another (buddying up, sharing best practice) combined with clearly communicating the vision and conveying precisely what is expected of each individual and their role within the team. By doing so, more can be achieved – faster.

2. Be realistic about your goals

In Goldeneye, James Bond says ‘England expects.’ And it does, but perhaps our expectations of our national team have been unfounded for far too long. No one needs reminding that England’s last victory was in 1966, yet there still remains an inherent expectation that we are somewhat better than what our track record actually suggests we are.

Setting targets that are both unrealistic and unachievable may look great when sat with the accountant at the start of each quarter, proclaiming how much better your teams will perform over the next three months. But the sense of disappointment and abject failure that follows can be detrimental to team morale and you could face an exodus of your top talent while at the same time, the rest of the management team are sat rubbing their heads wondering what exactly went wrong.

England’s failure to progress past the group stages at this year’s tournament was a shock to many. Two of the teams in our group, Uruguay and Costa Rica, have never really been placed high in the FIFA rankings and on paper, England should have made it through the group along with Italy.

However, neither of us did and there are many critics who argued that the England team ‘assumed’ they would beat our South and Central American opponents – but that was a key mistake. In fact, Uruguay and Costa Rica were not just ‘opponents’, they were rivals – rivals who took their chance on the big stage and rose to the challenge of potentially knocking two leading powerhouses of football off our proverbial perches. And didn’t they just. So as recruiters, we need to respect the competition and appreciate them for their strengths as well as recognising their weaknesses.

We see it in the papers and trade press all the time – companies who describe themselves as ‘the market leader’ or ‘a leading player’. Admittedly, we work in an industry were self-aggrandising is par for the course, but reality bites and can have long-lasting consequences.

Look at how the World Cup has panned out so far: England went out in the first round, as did Portugal and Italy but perhaps the greatest shock was seeing the holders, Spain exit the competition at the first hurdle. And just recently, in the world of tennis, we saw defending Wimbledon champion Andy Murray eliminated in straight sets. So not even being Number 1 in your market place is any guarantee of success, so why do so many recruitment firms claim to be? Unless you have the highest billings, the highest percentage of annual sales, the largest share of the market and the biggest client and candidate base – you’re not the market leader!

5. It’s OK to lose the battle but make darn sure you win the war

As I write this, it is the 4th July, or American Independence Day if you are from that side of the pond. This is the day that our American cousins celebrate giving our English behinds and darn good thrashing, but as if that wasn’t enough, this week they rubbed a rather large dash of salt into our World Cup wounds by showing us how the game – the game we invented – should actually be played. And hats off to them for it.

In what was arguably one of the most thrilling games of the tournament so far, the USA versus Belgium showdown lifted the World Cup to new heights. But despite lacking the talent of their Belgian rivals, the USA team, galvanised by the former World Cup winner Jurgen Klinsmann, went the distance as his team rose to the occasion.

What the USA team demonstrated was that hard work, commitment and joined up thinking throughout the leadership, coaching and playing team can sometimes result in performance levels which exceed all expectations (Roy, are you listening?!).