Logical Recruitment: From zero to £1 million in less than a year

Logical Recruitment: From zero to £1 million in less than a year 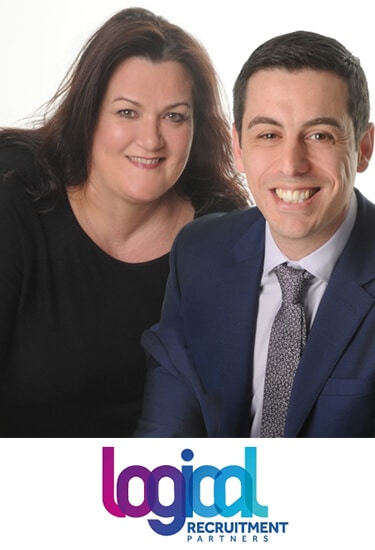 Marc Ryzer and Tiffany Rogers have been running their recruitment business specialising in sales and call centre recruitment for less than a year but are already heading for a turnover of £1 million.

When an estimated 80% of start-ups fail within the first two years – and at least half of those don’t make it past the first year – that’s impressive.

We discover how Marc and Tiffany at Logical Recruitment Partners are building a successful recruitment business through hard work – and a fortuitous introduction to recruitment industry leader in finance and back office, Simplicity.

Marc Ryzer was sales director for a recruitment company working for a boss he didn’t rate and had nothing in common with. After one disagreement too many, he walked out and decided it was time to do what he should have done years ago – set up his own recruitment business.

As he cleared his desk and logged off for the last time, Marc saw an Inmail on LinkedIn from Simplicity Business Development Executive Sam Glover saying, “Have you thought about setting up your own company?” Marc said: “I messaged him back and asked him to ring me in half-an-hour. It was great, we met in The Hilton the following day.”

That meeting set in motion a series of events that led to the formation of Logical Recruitment Partners. This is a success story that Marc says would not have been possible without Simplicity’s involvement.

Having worked together since 2006, Marc and Tiffany are joint managing directors.

Marc said: “I wanted Tiffany with me but she had never thought seriously about running her own company either. After an hour thinking about my idea she said she was in.”

Having the necessary cash flow to pay their workers and grow their business was an overwhelming concern when setting up on their own – and that’s where Simplicity came in.

“A bank had said they would be prepared to lend us £100,000, but something was not right. Now I realise we need a lot more than that to run the business we have won” said Marc. “They also called our clients debtors showing their lack  of knowledge of the recruitment industry. I didn’t like that. They are our customers.”

“But with Simplicity I really liked Sam Glover and I was reassured that they would provide the payroll and support for our business no matter how much the turnover was.

“As long as our clients stayed within their credit limits, Simplicity were going to provide the flexible finance we needed. We were paid by them after two weeks in business, which was so important for us starting a new recruitment company.”

And that support is on-going, according to Marc.

“Simplicity has enabled us to increase our headcount confidently. We’re now a team of seven. The cash injection we get every single Friday from Simplicity means we have been able to work confidently on new business whenever we have wanted to”.

Marc continues, “I know they are going to support our future growth aspirations”

“Sam Glover rings me every single week, which he doesn’t have to do and which doesn’t benefit him or his business financially in any way.”

“On the rare occasion that something doesn’t go quite right, they are always accommodating” he said.

“We had an issue with the customer service from an associated business. They took someone off a sales role to sort it out and the problem was resolved straightaway”.

“They were adaptable from the start of our relationship. We felt some of their systems were slow and they listened to our feedback and offered an on-line timesheet process which solved the problem.”

In Marc’s opinion, Simplicity played a major and important role in the success of their start-up business. He says, “If someone was going to start up their own recruitment company I would recommend Simplicity.”

Six reasons why Marc Ryzer and Tiffany Rogers would not go anywhere else:

• They’re a business and strategic partner

• They’ve been essential to our growth